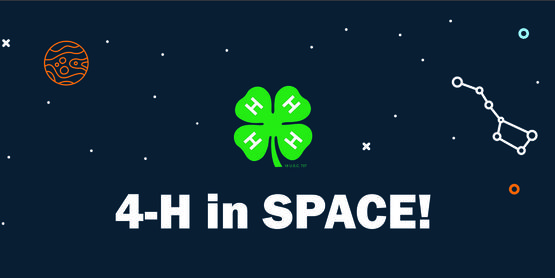 In Fall of 2018, Jefferson County 4-H began participation in the Student Spaceflights Experiments Program, an initiative organized by the National Center for Earth and Space Science Education (NCESSE). A competition was implemented where over 50 student teams designed experiments that could theoretically be run on the International Space Station, with the outcome being that one experiment would be selected for full implementation. Round 1 proposals were reviewed by a team from Cornell University Spacecraft Planetary Imaging Facility, who chose three finalists to proceed to the Round 2 national review board at NCESSE. The competition concluded in November with the announcement of three finalist teams at 4-H Space Night on November 9th, 2018. To see a full overview of completed experiment submissions, check out the SSEP Proposal Booklet! 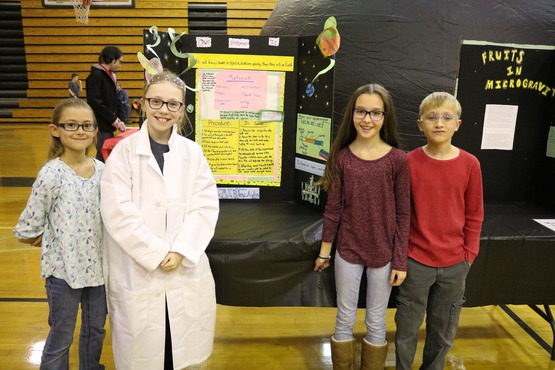 In January, NCESSE announced the Round 2 finalist team. A group comprised of 6th grade 4-H participants from H.T. Wiley Intermediate School was selected to implement their experiment on the International Space Station, to be launched in the summer of 2019. The five students on the team are Ryan Arca -Steel, Agnika Ghatak, Alexander Higginbotham, Skyye Mee-Thomas, and Mallary Williams. The team has two teacher facilitators, Schyler Rizzo – the Site Coordinator for the 4-H Afterschool Program at Wiley, and Ann Fillhart, a 6th-grade teacher at Wiley as well as a 4-H volunteer. The team’s experiment investigates the removal of rust in a microgravity environment.

The Experiment - Comparison of Rust Removal in Space vs. on Earth

The students proposed a very simple experiment. Step One involved putting a set of carbon steel rods through a rusting process in a saltwater solution, prior to placing them in a test tube bound for the ISS. Step two involved enclosing the rusted carbon steel rod in a test tube and enclosing a vinegar/water mixture into separate compartments of the test tube. Upon arrival on the ISS, the volume containing the vinegar solution will be released into the volume containing the carbon steel rod, allowing the process of rust removal to begin. In order to facilitate the experiment, instructions were to be provided for the astronaut attending to the experiments in the research wing of the ISS.

The experiment would take place in a NASA approved test tube, known as a Fluid Mixing Enclosure (FME) type 3. The FME is a flexible silicon test tube that allows experiment components to be separated with a clamp system.

A diagram of the FME, a fluid mixing enclosure, used for test tube experiments on the ISS 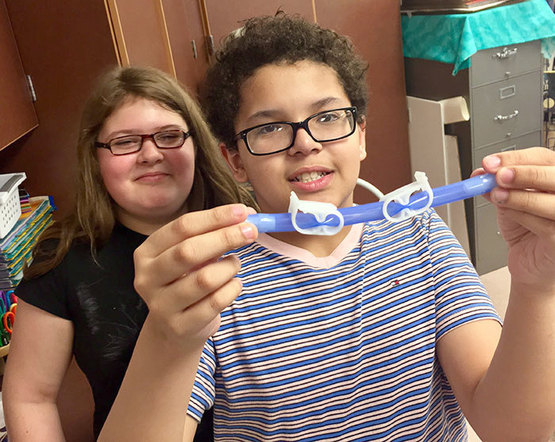 Alexander Higginbotham holds up an FME used for the trial tests of the rust experiment.

A total of five FME's would be prepared, one bound for the ISS, and the other four as ground-truth tests for comparison with the FME experiment that runs on the ISS.

The students began testing their rusting procedure in their classroom at H.T. Wiley Intermediate School. The goal was to determine a rusting process that would be used across all experiment specimens. Students conducted initial rusting tests using carbon steel welding rods, provided by Haun Welding. Pictures of initial tests below. 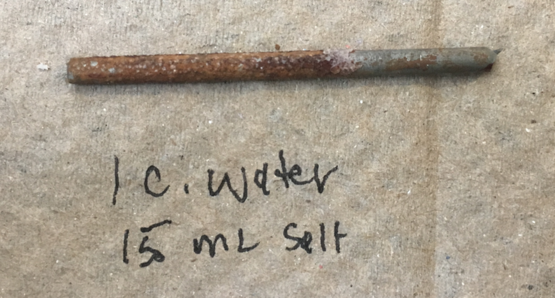 Sample specificity required that the carbon steel rods be machined to the same size/weight to ten-thousandths of a gram (.0001). In order to accomplish this, New York Air Brake engineer Jeff Sauter provided assistance and machining expertise. The student team created a technical drawing, which provided instructions on the size/weight requirements. On February 15th, the student team toured New York Air Brake and looked at the equipment, a hardinge lathe, that would be used to machine the metal rods for their experiment.

Students tour New York Air Brake and look at equipment that will machine parts of their experiment.

As the students experimented with the rusting process and machining equipment, they also saw a need to connect with an expert who could advise them on their experiment assembly procedure. Eventually, the team linked up with Dr. Vaeth, from Cornell University's School of Chemical and Biomolecular Engineering. Dr. Vaeth became the expert that provided in-depth information on the rusting process as well as provided feedback on the experiment assembly procedure through several videoconferences with the student team. 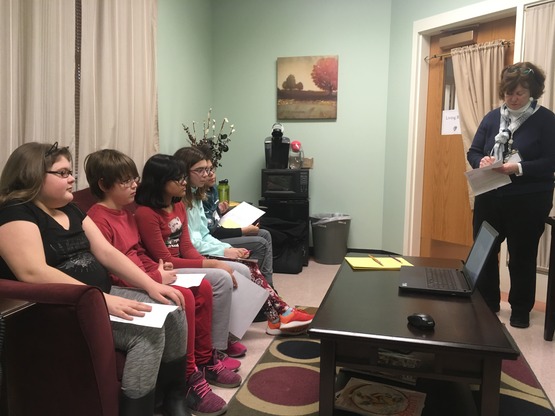 The students also needed precise measuring equipment and a lab to practice assembly of the experiment. The Research and Development Lab at Knowlton Technologies LLC was very kind to offer access to their lab and equipment. On May 23, the student team went to the R&D Lab at Knowlton Technologies for a final review of their experiment procedure, mock assembly, and pre-sterilization of several experiment components. The team at Knowlton was kind enough to show a microscopic view of the rust samples, and even provided a tour of their facility to the students! 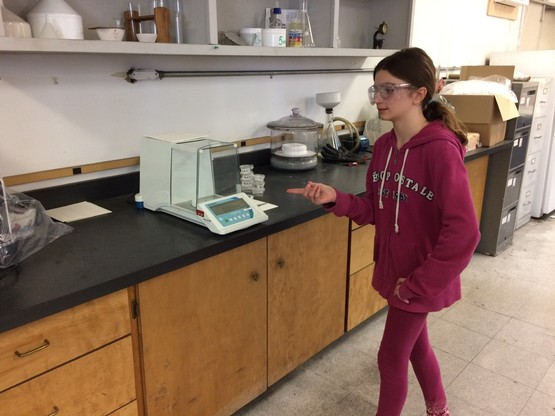 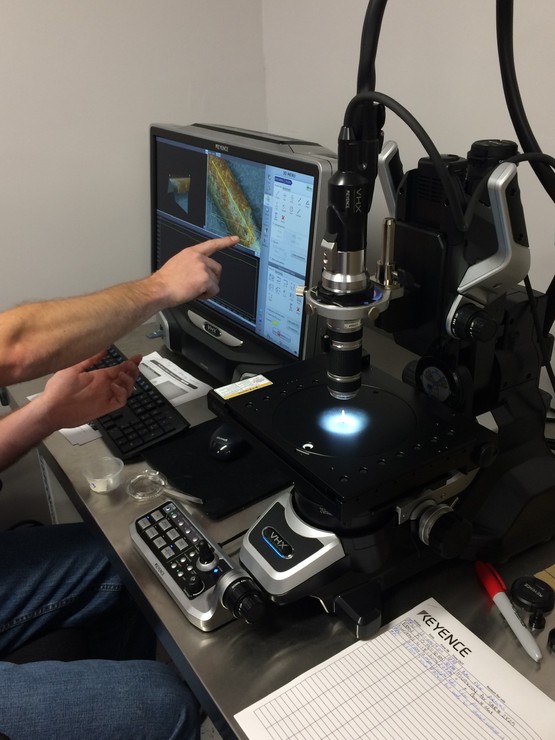 of carbon steel samples with their microscope.

The final experiment was assembled on June 28th, at Cornell University's Lab of Chemical and Biomolecular Engineering.  The experiment required all components to be autoclaved (sterilized). The autoclaving process was overseen by Dr. Kathleen Vaeth, a senior lecturer at the university. Students were required to interface with a team member from NanoRacks, a private company responsible for the development and use of experiment equipment used on the International Space Station. 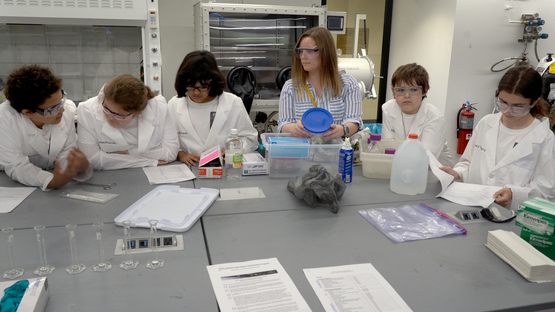 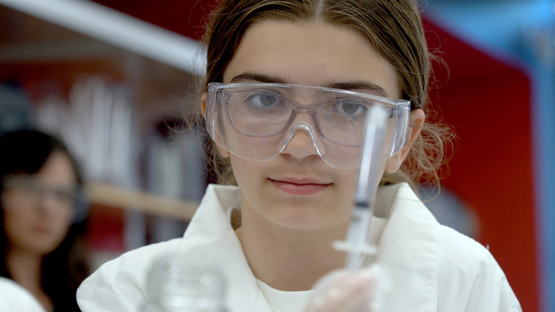 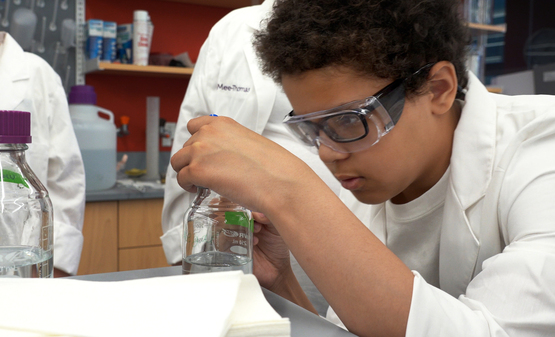 On July 25, 2019, the SSEP Experiment was transported to the International Space Station via a SpaceX Falcon 9 rocket! A full video of the launch can be found below:

Conducting the Experiment in Space and on Earth

On July 24, 2019, the experiment was transported to the International Space Station via a SpaceX Falcon 9 rocket, along with 37 other student experiments submitted internationally as part of the Student Spaceflight Experiments Program. The experiment remained on the ISS for four weeks, during which time the astronauts carried out the students' instructions for activation of the experiment, and termination in space. The same process was applied to four earth-based experiments during the same timeframe - for comparison.

The experiment returned to earth on August 27th, and the students received their test tube on September 5th! The experiment was analyzed at the R&D Lab at Knowlton Technologies LLC over the course of September 2019.

The goal of the experiment was to determine if rust removal takes the same amount of time on the ISS as on Earth. The student's hypothesis was that the rate of rust removal would actually be faster on earth, as in space the rusted rod may have less exposure to the solution while suspended in microgravity. The students began their process of harvesting data by removing all rusted rods from the solution and putting them in a desiccator, an enclosure that would remove all moisture. After the rods had been thoroughly dried, the rods were ready to be weighed. The students were astonished to find out that the ISS based experiment weight fell exactly in the middle of the measurements across the group - two weighed more and two weighed less. This indicates that the rate of rust removal takes place at the same rate in space as on earth! Of course, this is the first set of data for this type of experiment, so several more iterations of this experiment would allow a broader data set to be conclusive of these results!

In addition to observing the weight differences of the rusted rods, the students observed the rods utilized Knowlton Technologies' high power microscope.

The students are hopeful that the data provided by their experiment will be a starting point for further experimentation and may one day be beneficial for the safety of long term space flights and even space colonization. 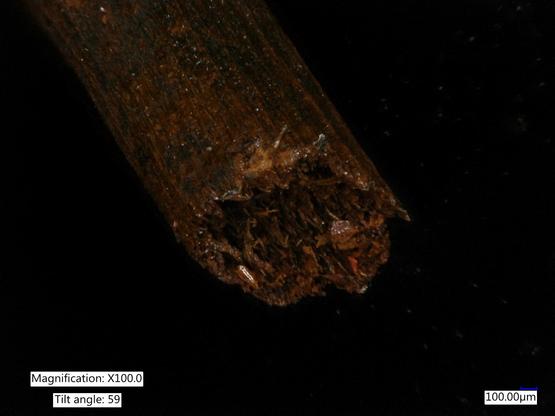 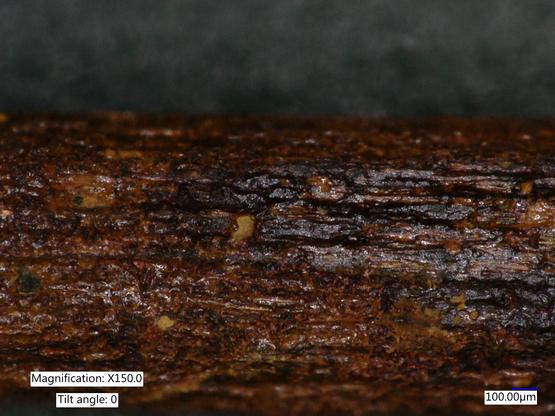 As with all missions to space, the SSEP experiments will be accompanied by mission patches. Jefferson County 4-H hosted a mission patch contest for youth grades K-6 and 7-12. With over 100 entries in the two categories, two mission patches were selected to represent the experiments. Students used the following mediums to create their designs: crayon, pencil drawing, colored pencil, marker, and graphic design software. The patch submissions were judged by the Jefferson County 4-H Advisory Committee, and selections were made for each age category. 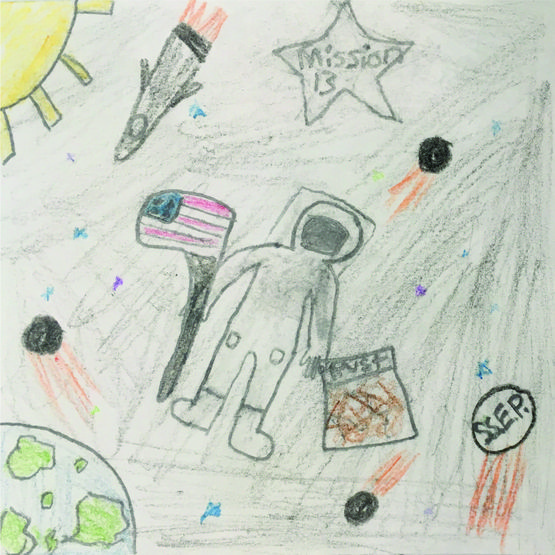 Mission patch winner for the K-6 category, submitted by 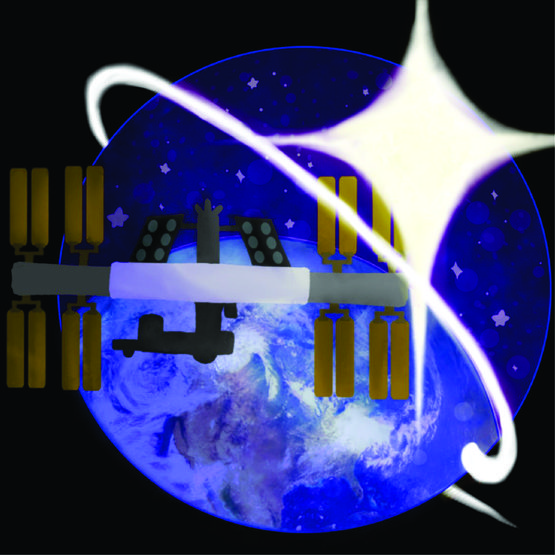 Mission patch winner for the 7-12 category, submitted by

The Student Spaceflight Experiments Program [or SSEP] is a program of the National Center for Earth and Space Science Education (NCESSE) in the U.S. and the Arthur C. Clarke Institute for Space Education internationally. It is enabled through a strategic partnership with DreamUp PBC and NanoRacks LLC, which are working with NASA under a Space Act Agreement as part of the utilization of the International Space Station as a National Laboratory.

Check out our full implementation plan for CCE participation in SSEP Mission 13 here.

Jefferson County 4-H youth would not be able to participate in the Student Spaceflight Experiments Program without the support of the following organizations/people:

A special thank you to the following organizations and people for their contributions to this project:

For more information on SSEP or updates on the International Space Station, follow the Student Spaceflight Experiments Program blog!

You can learn more about SSEP by visiting the Student Spaceflight Experiment Program.

Read more from NASA regarding the SSEP.