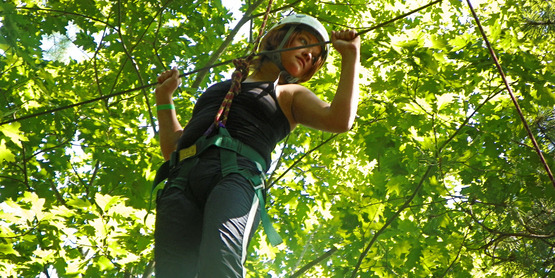 Six days and five nights! Youth will explore the possibilities associated with stewardship and sustainability as it relates to the environment we live in. Programming will include wildlife science, gardening, hydrology, and natural resources in addition to the typical camp programming such as swimming, archery, ropes, canoeing and paddle boarding.

This camp is open to army youth ages 12-16 who have parents who are currently deployed, six months prior to deploying, or six months following a deployment.

To prove eligibility, families must provide:

1. a letter on official letterhead from their First Sergeant, Platoon Leader, or Company Commander stating that they are within 6 months of deploying, are deployed, or just returned from a deployment within the last 6 months.
OR
2. orders of deployment

This camp is free, other than a $25 non-refundable deposit.

Families must register online, pay the non-refundable deposit and provide the eligibility information to reserve their camper’s spot.

Travel expenses, including mileage, airfare, bus tickets and/or train tickets will be reimbursed up to $150 per camper. Campers can be transported by approved drivers of CCE from local transportation hubs if needed. Meals during travel will also be reimbursed based on the GSA rate for Watertown, NY. Receipts will be required for reimbursement.

Due to state guidelines, these camps are only open to youth from the following states: New York, Pennsylvania, New Jersey, Connecticut, Massachusetts and Vermont.

This military camp opportunity is funded through Kansas State University and the 4-H Military Partnerships Project. The goal of the Army Child and Youth Program is to deliver Youth Camps for youth of Soldiers severely wounded, ill, and injured during a deployment. The camps will provide the youth an opportunity for respite care and, though therapeutic interventions by certified therapists, teach the youth how to cope with their changed world due to injury or illness of a family member as a result of their service in our country's military.

To register for any of these camps, go to https://www.bunk1.com/en/i/307/login. Use your existing account, or create an account using the invitation code 4HWABASSO.